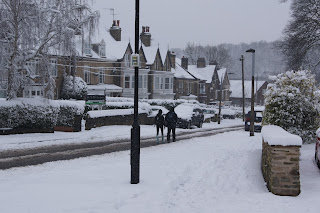 This is the view down our road last Saturday morning, a weekend in late March, when everyone was due to arrive for the first of my spring flower workshops. It had snowed for 24 hours solidly and it was still snowing. The only way up and down the road was in a 4 by 4 or on foot with walking boots! Then here is is the view outside our back door – just look at the poor, frozen daffodils! 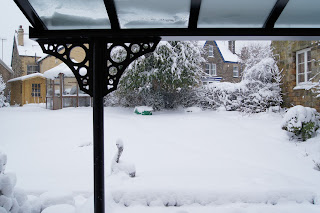 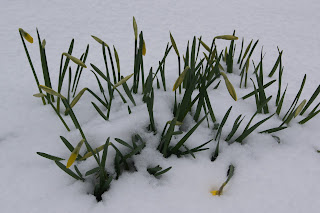 Luckily, most of the participants were able to come on the Sunday instead so we were able to go ahead with the workshop. Planning it had been a bit of a challenge as there were so few English flowers available from my wholesaler – no anemones, no alstroemeria, no lilies, no ranunculus, no yellow iris and no bluebells. All of these had been available this time last year when we were experiencing an unseasonable heatwave! This shows the challenge of planning events using English flowers which are so sensitive to our variable weather. I was able to buy scented narcissi – both yellow (golden dawn) and white (avalanche), yellow and white tulips, green irises (intriguing – I had never seen these before) and two different sorts of eucalyptus. I designed a grouped bouquet using just yellow, white and green. I made a visit to the Sheffield flower market to buy some gorgeous, pure white alstroemeria (though they weren`t fully open by Sunday despite keeping them in a warm room) and also some additional foliage to add a bit of contrast with the eucalyptus. Here is the room set up for everyone and a close up of the flowers ready to go. The green irises were quite exquisite in a subtle kind of way. 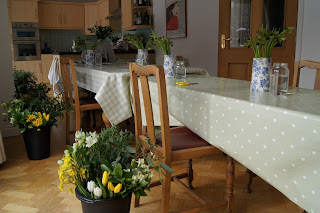 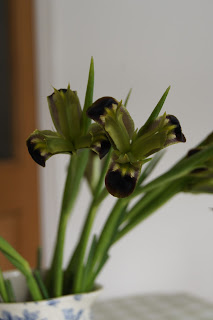 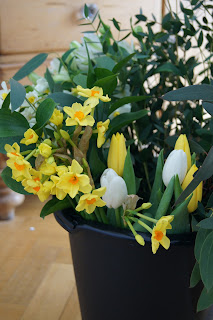 We used the tulips for the centre of the bouquet, but I suggested that everyone keep them low in the centre and place the foliage an inch or so higher than the tulip heads. This was to give them space to grow – this is because the pesky things grow several inches in height when you put them in water. Also, placing them in the centre meant that they were held straight by the other flowers. Thinking about this kind of thing is important when you consider the lifetime of the bouquet – you want it to look lovely when you make it, but you also want it to look good several days later when it is standing in a vase on your sideboard. We made two of the surrounding posies with the narcissi densely grouped – one of white and one of yellow. Then we made the other two posies out of a mix of alstroemeria and green irises. I decided to do this because the irises were too small to stand alone as a group. The dark brown-purple of the iris worked well with the dark flecks in the alstroemeria. Here is the finished bouquet and participants taking photos of their creations (it is difficult to see the irises in photographs as they blend in with the foliage). 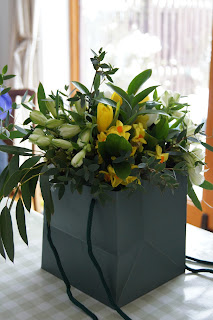 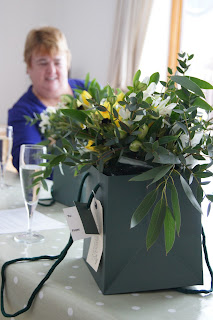 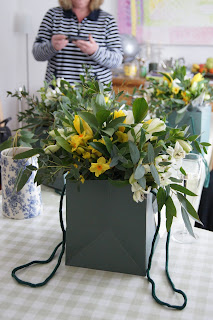 The participants were interested in other ideas for working with flowers and I showed them some of the books that have influenced me. Here they are – people and books. 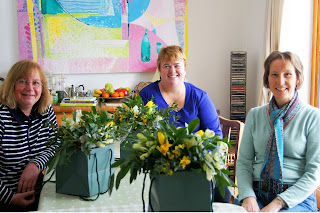 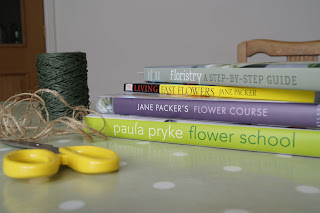 We had some discussion about the need to select a jug or vase which is the right shape, size and colour for a bouquet. I decided to use this unusual light green jug that I picked up from an antique market last year. You can see how the bouquet looks different from different sides. I took these photos a couple of days after the workshop - the tulips had grown quite a lot and the alstroemeria had opened up. As the days progress the narcissi groupings will die before the other flowers. One advantage of the grouped bouquet is that it can be taken apart when this happens so that you are left with a few small posies to enjoy in smaller vases. 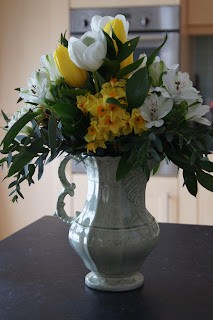 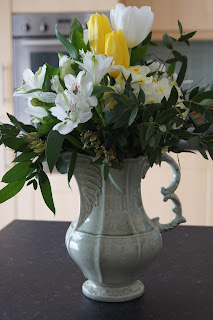 I had quite a few flowers left over as one participant hadn`t been able to make it to the workshop in the bad weather. So I decided to make an arrangement using chicken wire. This works as an alternative to oasis (floral foam). Readers of my blog may remember that I don`t use oasis in my flower work because I don`t like it, it isn`t biodegradable and it contains substances that may be carcinogenic. Chicken wire is an old way of holding flowers in place and it works very well. It also has the advantage that you can take flowers out of the arrangement and replace them at any time – this isn`t possible with oasis as it crumbles and disintegrates. Furthermore, flowers (especially spring flowers) last far longer in water than they do in oasis. Case made! Here is a spring arrangement which would work well as a table centre. 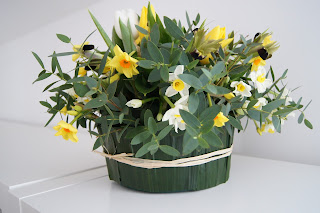 I also experimented with another method of holding flowers in position with this simple arrangement. The flowers and foliage are held in place by making a grid out of tape over the top of the container. The double daffodils are called golden ducket – they are large, bright and something to smile at during these wintery cold days. Roll on spring! 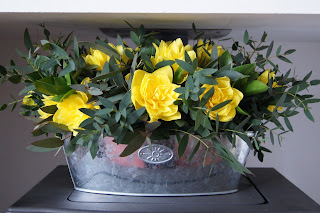