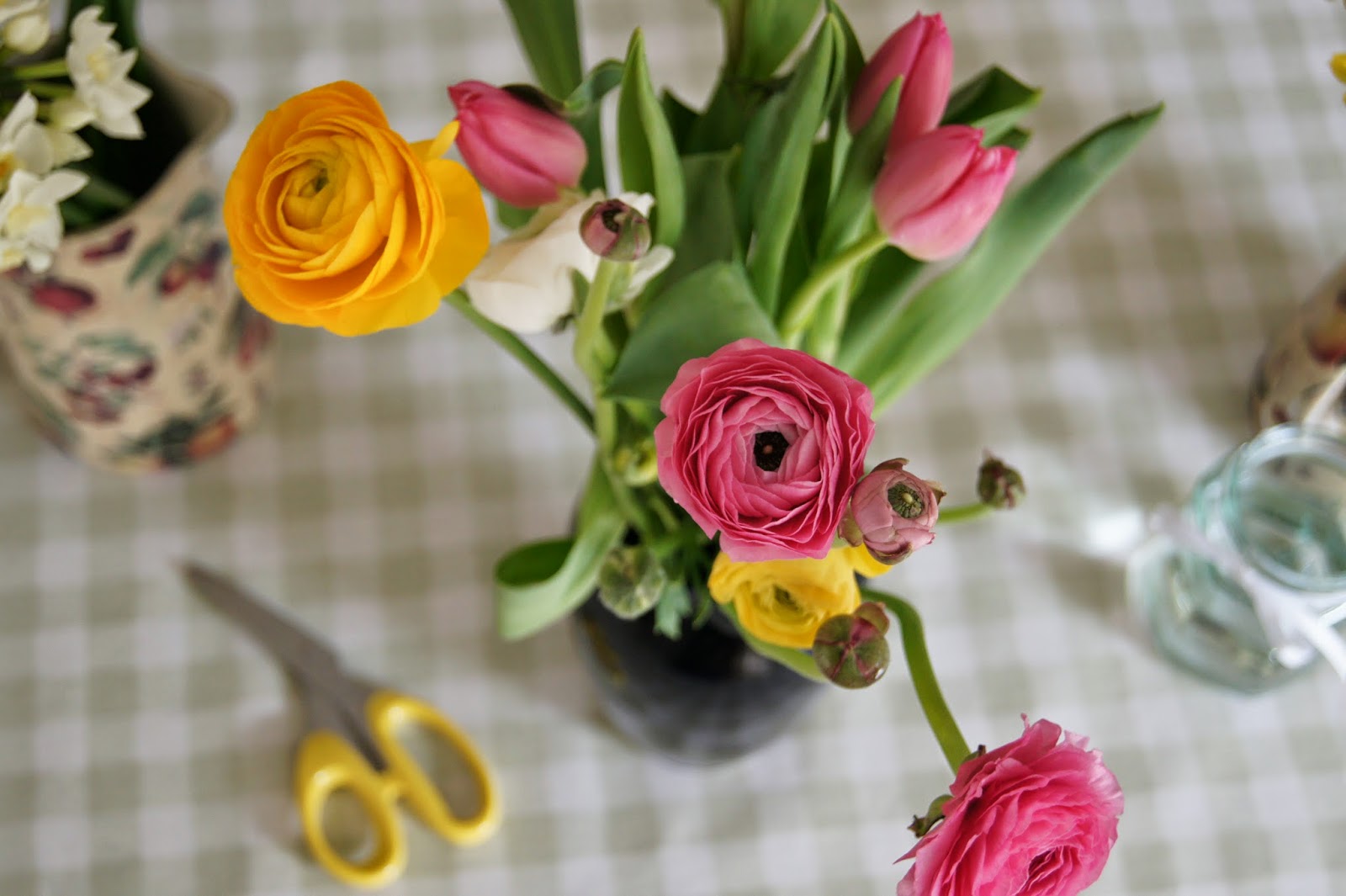 Ranunculus from Cornwall – I put lots of these beautiful, delicate flowers into my Mother’s Day bouquets. Mother’s Day is celebrated all over the world and mostly in the spring. According to Wikipedia, the UK version of the celebration derives from 2 sources. The first is religious, dating back to the 16th century, when mothers were re-united with sons and daughters released from apprenticeships and work in service in order to attend their mother church. The celebration declined with the Industrial Revolution, but was revived after the Second World War by the second source – US soldiers spreading knowledge of the American celebration of their mothers. The religious roots mean that the date of our Mother’s Day is linked to the church calendar and it is always held on the 4th Sunday of Lent – it could be as early as 1 March or as late as 4 April! Like Valentine’s Day, Mother’s Day is a fantastic opportunity for British flower growers, especially as interest in seasonal British flowers is expanding. My Cornish wholesaler told me he clocked up record flower sales this year as well as selling 1,200 bunches of Cornish foliage. Just look at the reason why – here are a couple of images of the tulips, ranunculus, white and yellow narcissi (avalanche and soleil d’or), alstroemeria, eucalyptus and pittosporum which made up the raw materials for my bouquets and flower workshop: 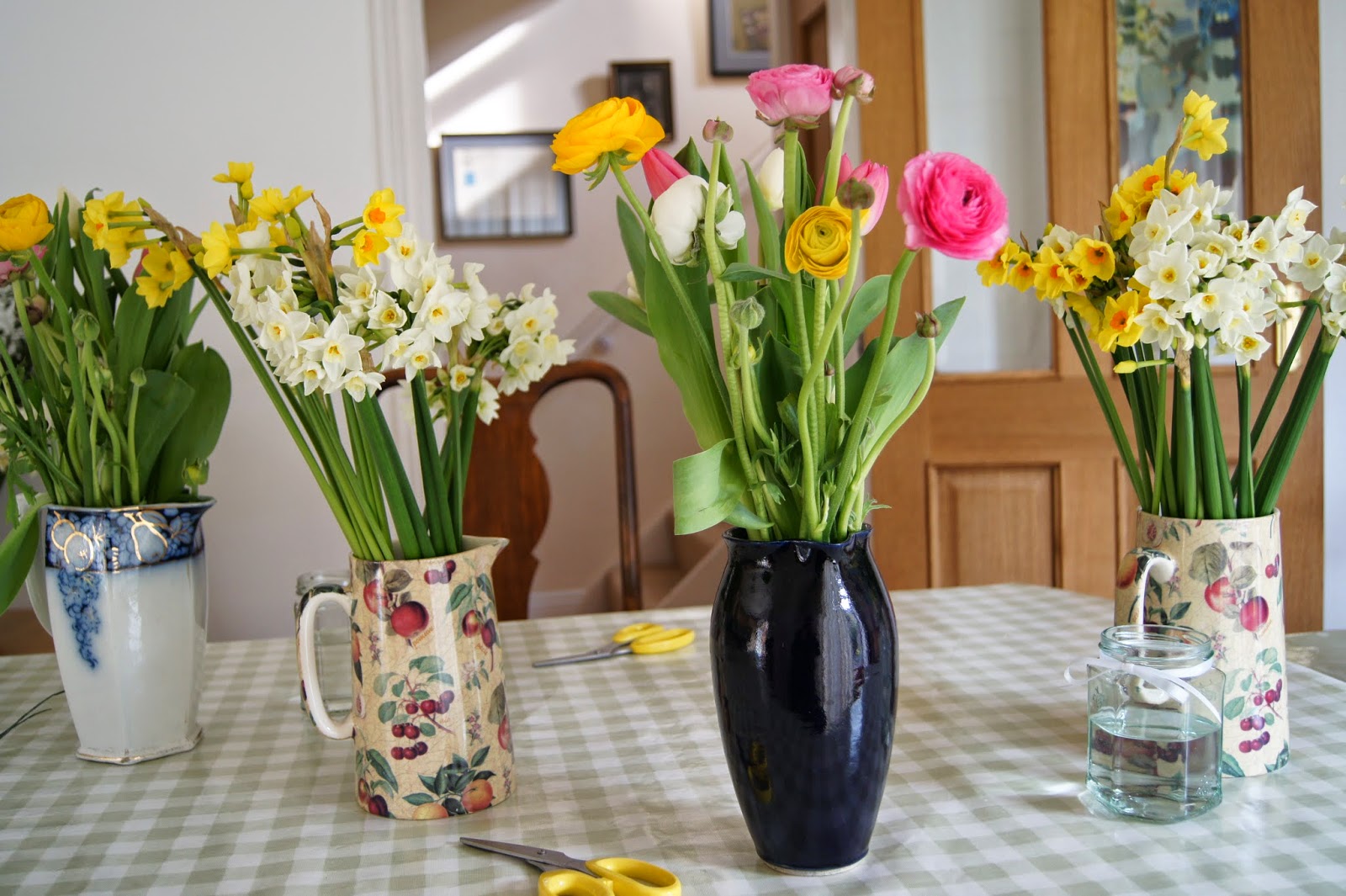 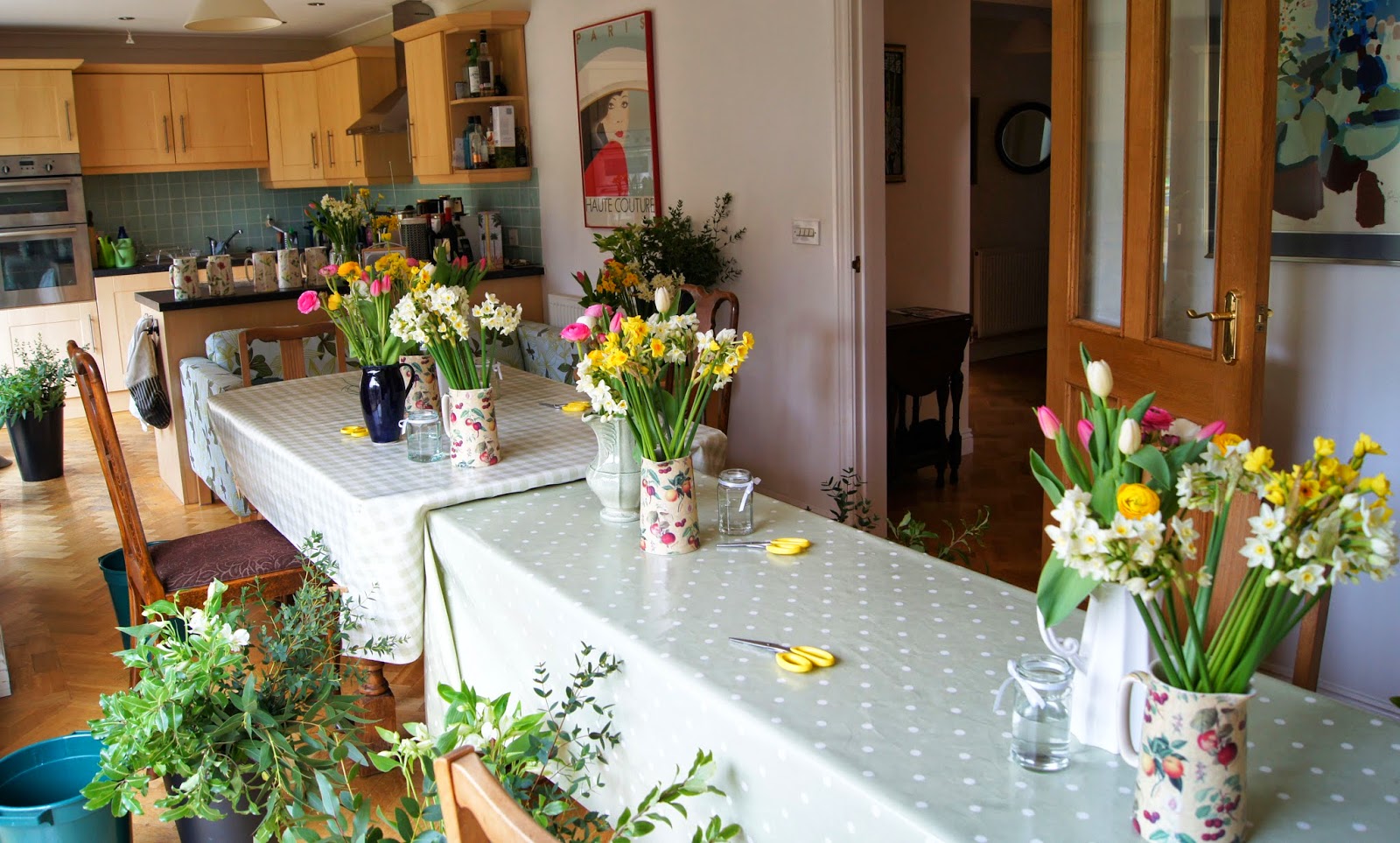 In the workshop we made grouped bouquets which we then placed in pretty Heron Cross jugs. The great thing about these bouquets is that you can look at the bouquet from different angles to see different groupings of flowers. I warned the workshop participants that their tulips would grow several inches in the vase and their bouquets needed to allow space for this. Just look at the growth in the third picture below - at least three inches (picture taken today,  five days after the workshop): 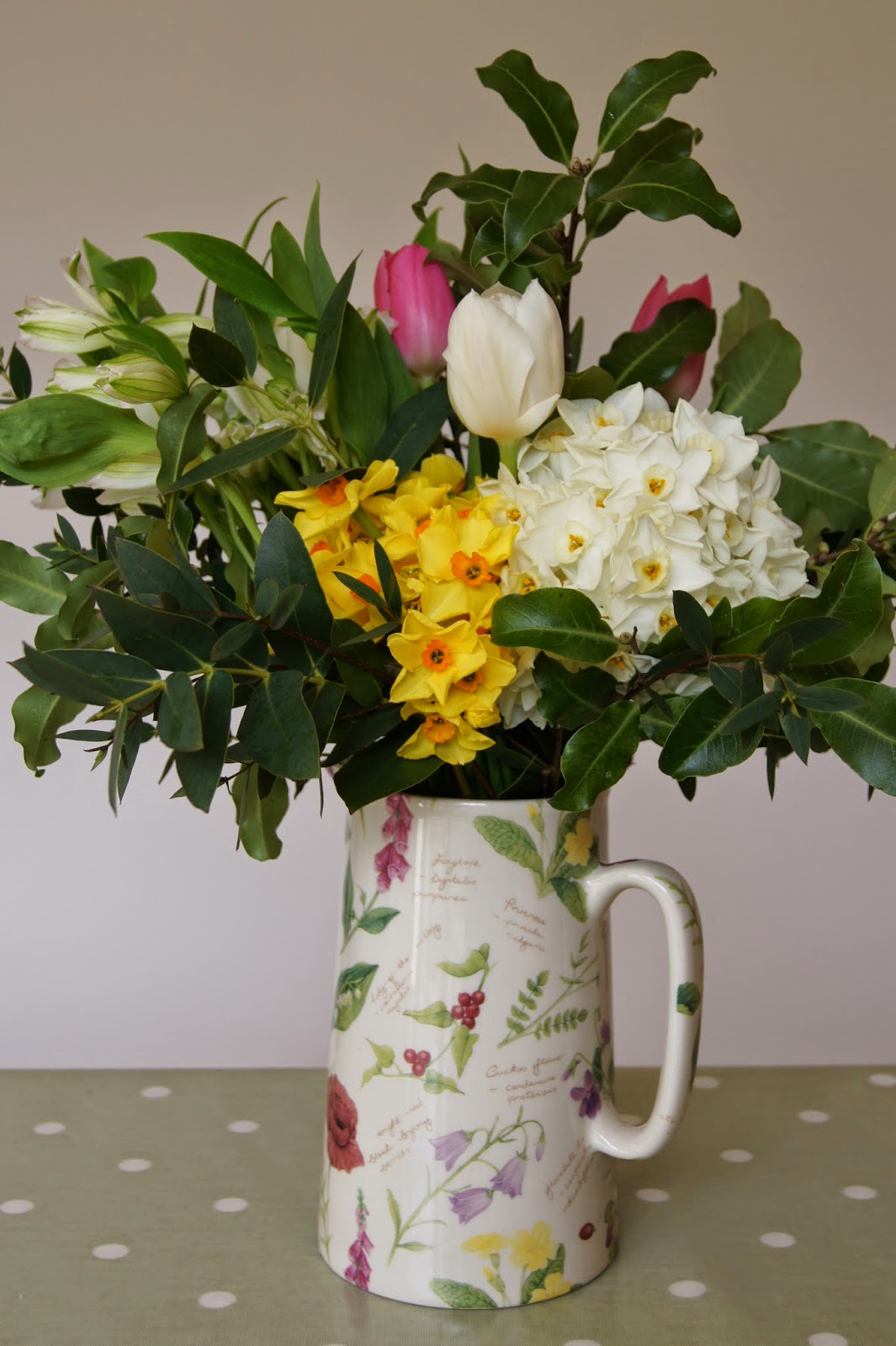 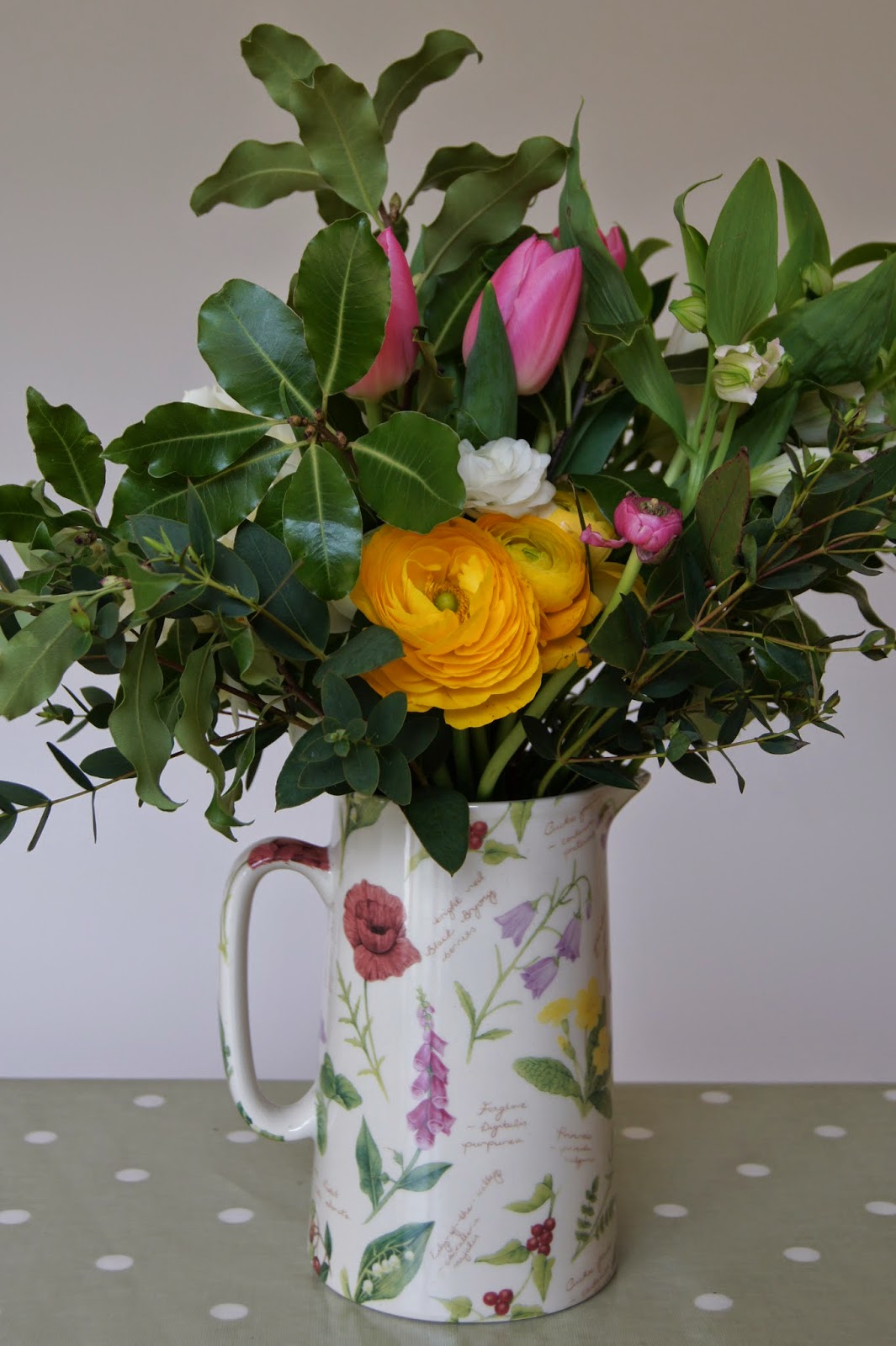 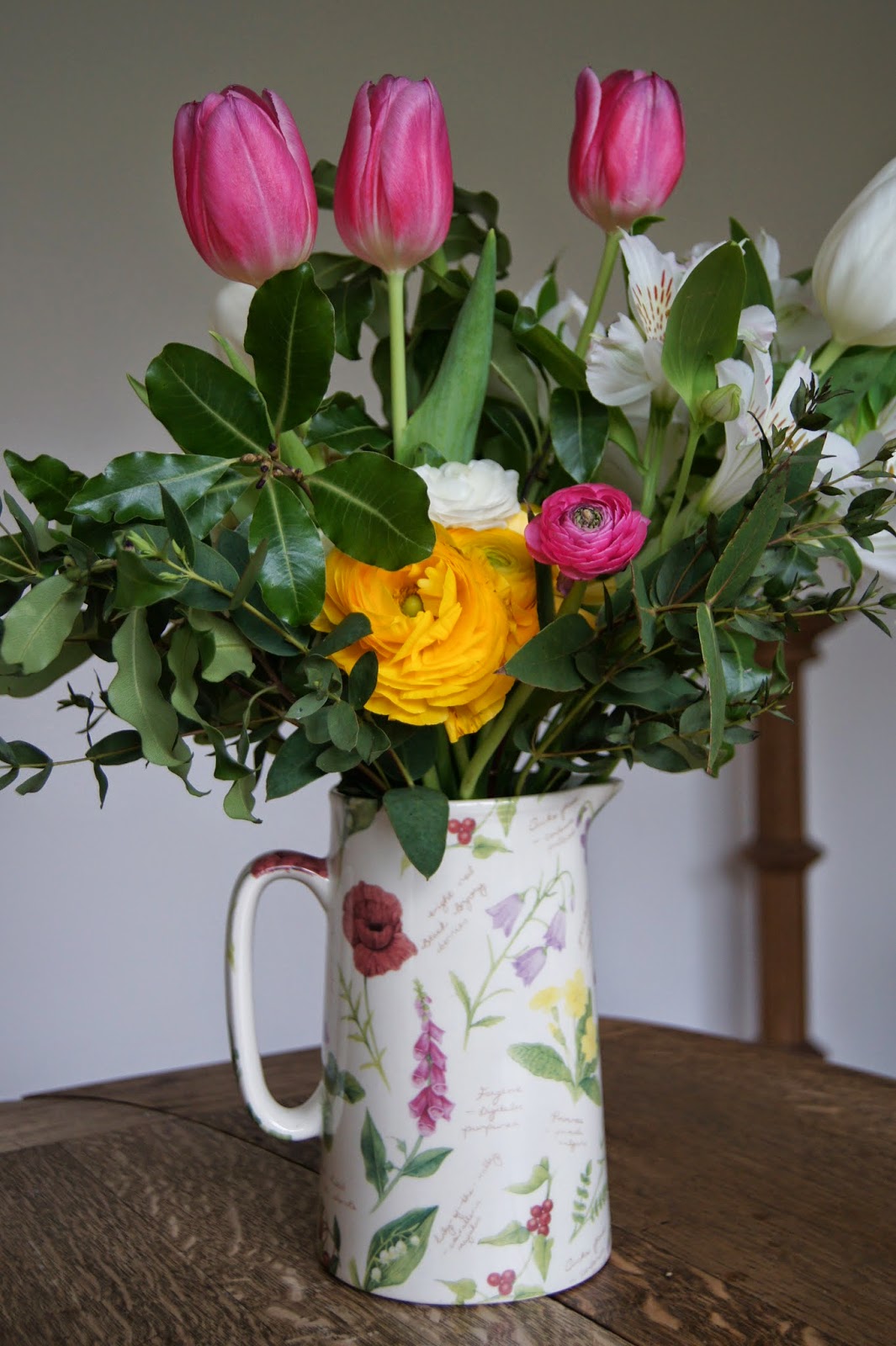 The idea was that participants would give their bouquets to their mothers, but I thought daughters and nieces deserved something pretty too, so we also made small posies in jam jars: 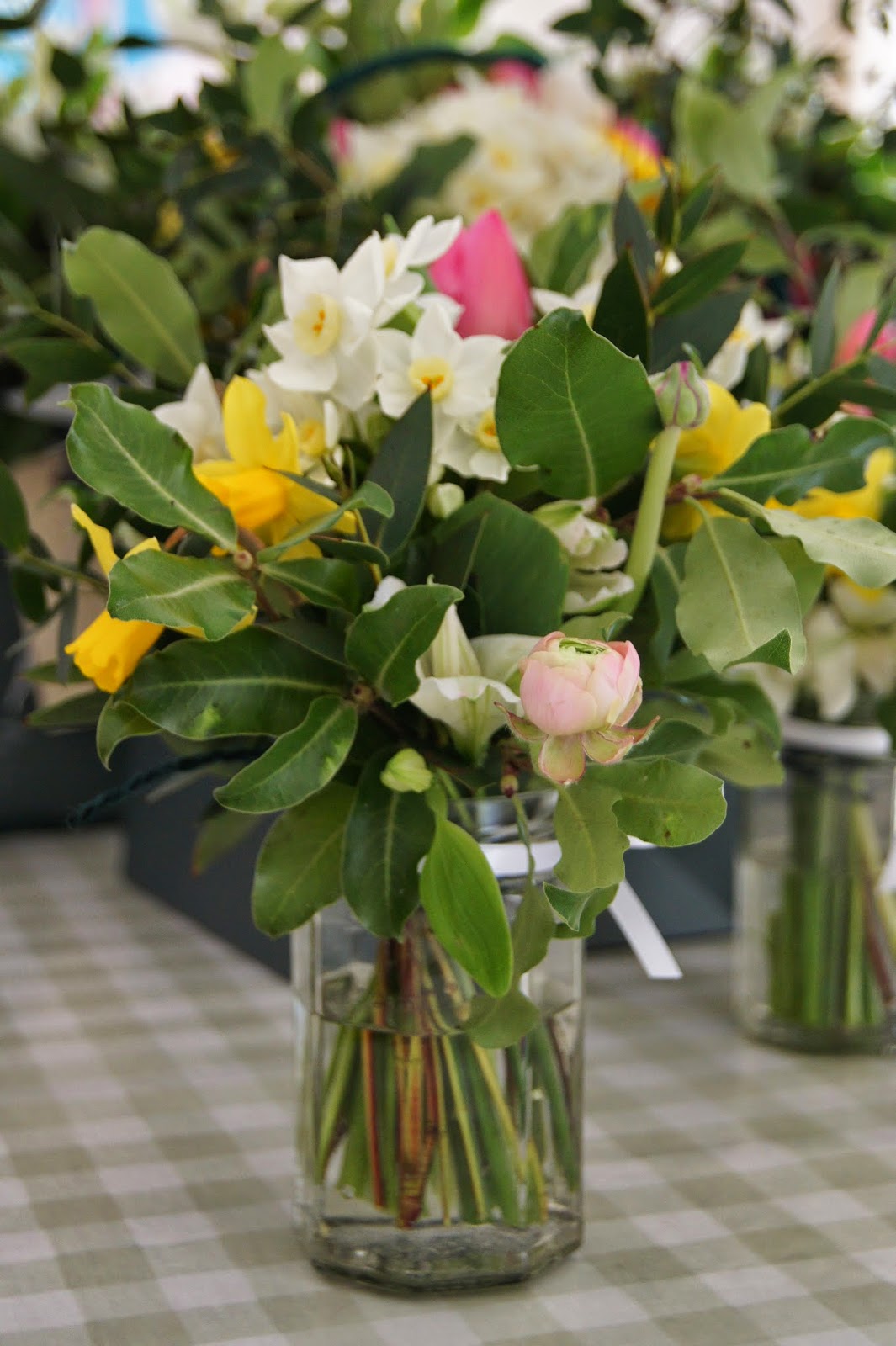 Then we put the jugs into green presentation boxes and everyone took a few photos: 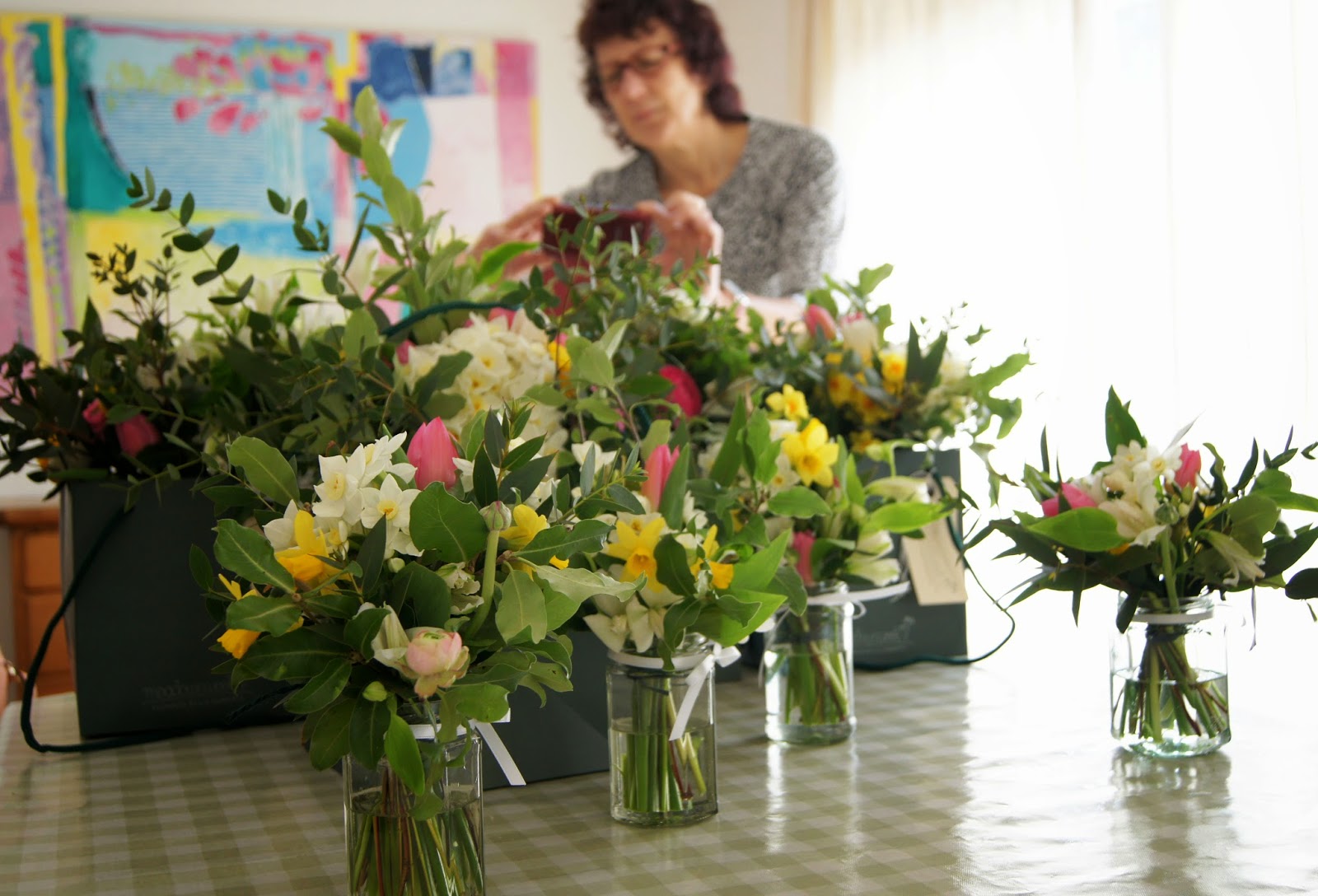 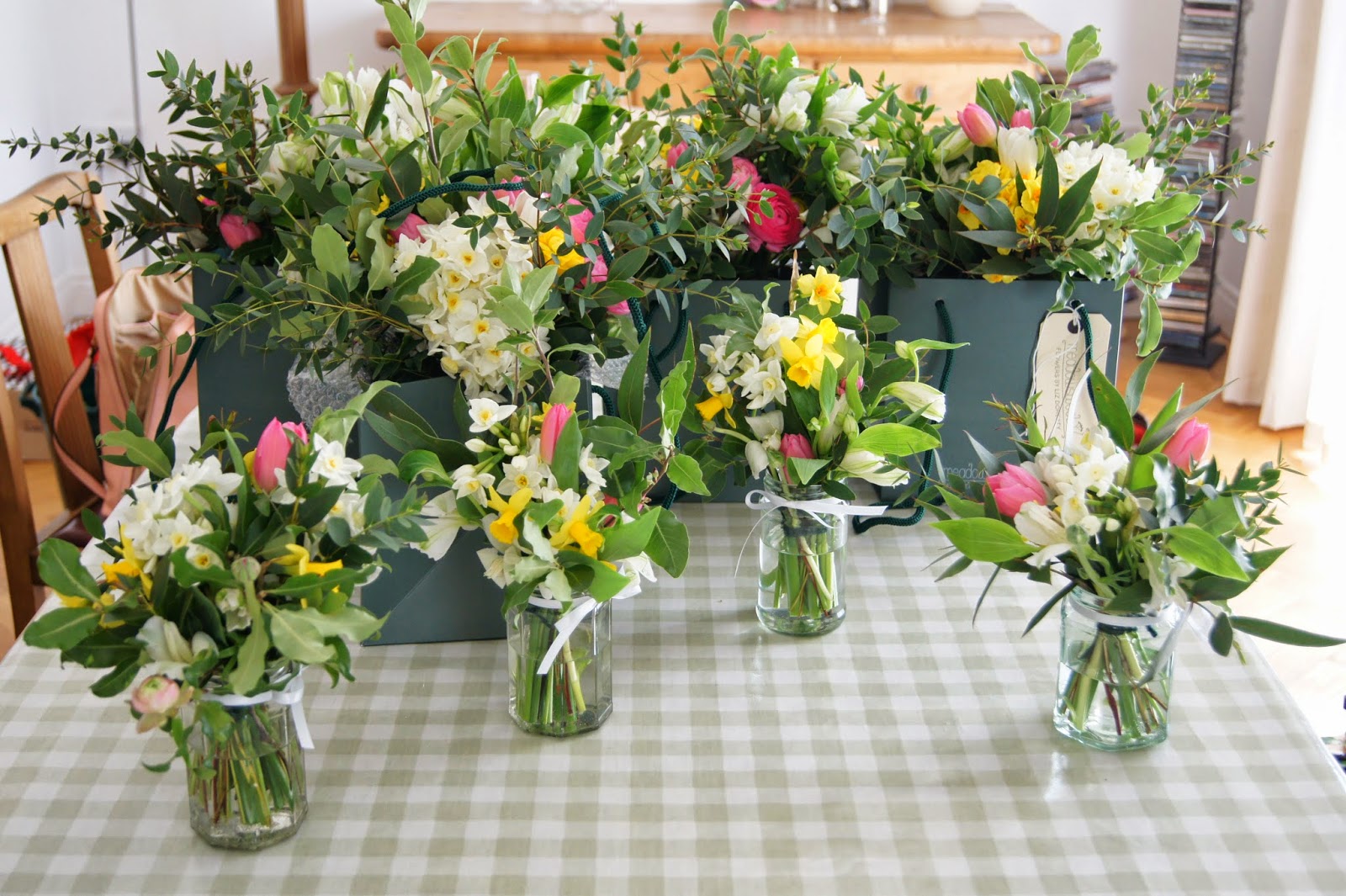 I really like this picture of one of the participants who looks particularly pleased with her creations – and so she should be, they were lovely, and skilfully made. 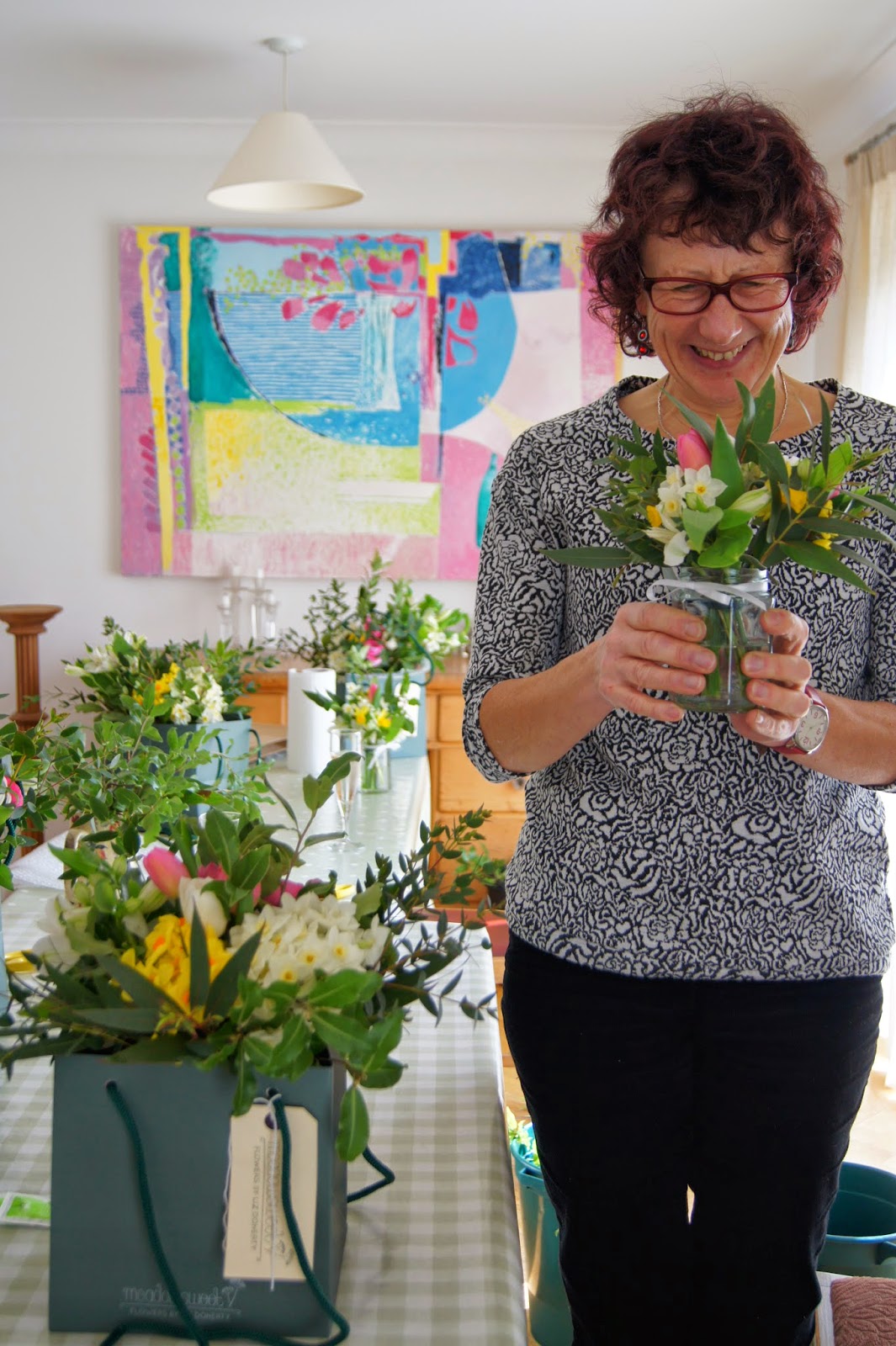 I will finish this blog with a picture of a humble bunch of daffodils that Mike bought for me yesterday from our local supermarket. I see these as a symbol of optimism for British flower growers. Daffodil is the common name for the genus of flower called narcissus. The wonderful thing about narcissus flowers is that they grow really well in Cornwall, Devon and the Scilly Isles. The flowering season lasts from November to May and this means that they catch four great markets – Christmas, Valentine’s Day, Mother’s Day and Easter. When the Garden Museum ran their exhibition – Floriculture – Flowers, Love and Money last year they presented some interesting facts about the UK narcissus market. The UK is the world’s largest producer of narcissus cut flowers and exports them to many countries including Holland, Germany, Scandinavia and America. The UK also produces half of the world’s narcissus bulbs and exports 10,000 tons of them annually (worth around £7 million). Overall, growing narcissus flowers adds around £23 million to the UK economy. Hurray for our flower growers, the wholesalers who distribute the flowers and the florists and supermarkets who stock them for us to buy. Enjoy your daffodils – the season will soon be over! 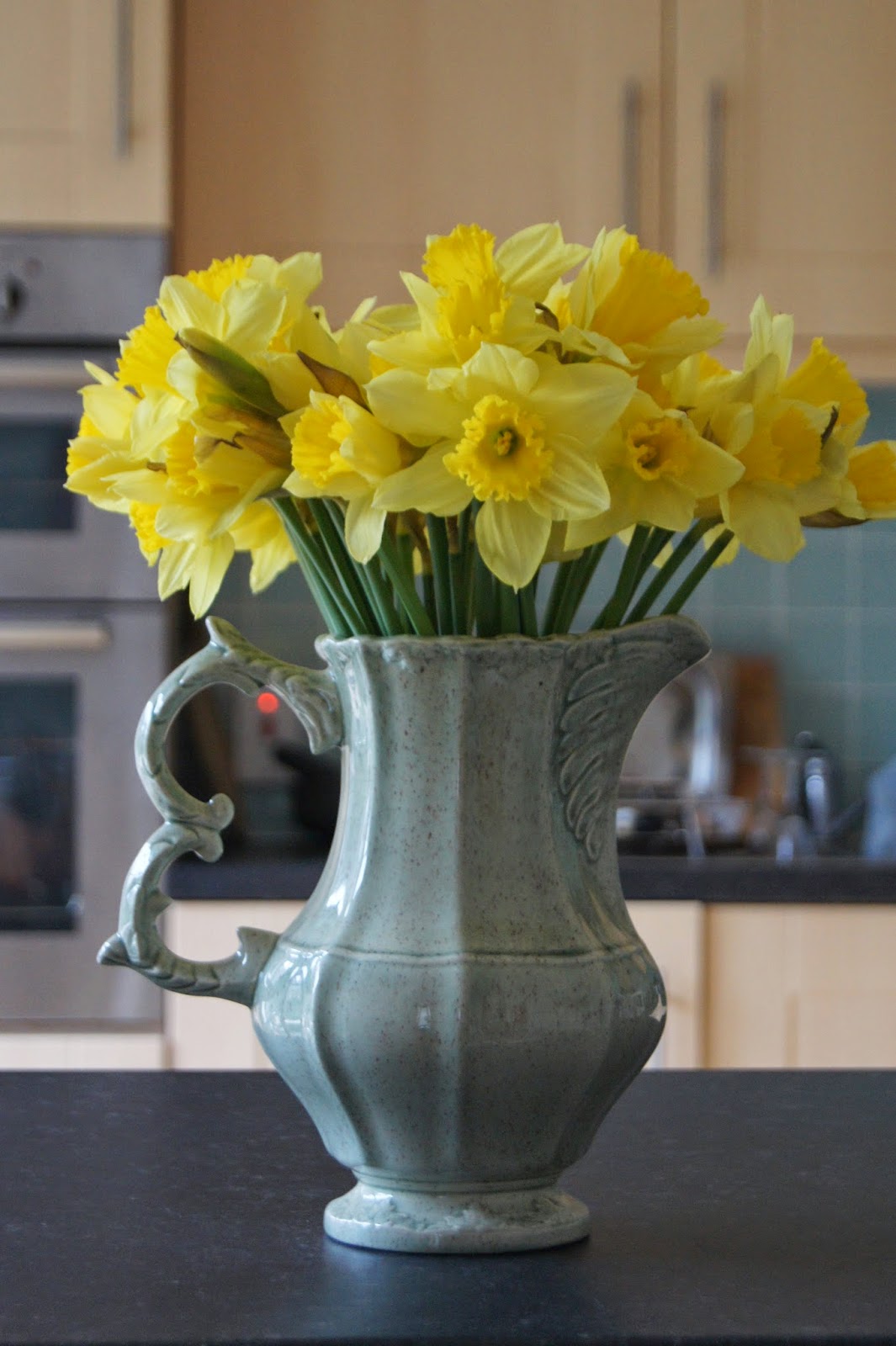