Flowers and the Environment

Flowers seem so natural that it is hard to think of them harming the environment. But they can. Transporting flowers from distant places like Kenya or Columbia, or even from Holland, generates carbon emissions. Also growers often use pesticides or fertilizers which are not regulated as tightly as they are for food production. This can be harmful to agricultural workers. The best flowers are those we grow in our own gardens with minimal use of chemicals – no ‘flower miles’ and safe for everyone’s health. If we don`t have our own garden flowers, I think it is best to buy responsibly grown flowers locally – like these lovely scabious and pure white chrysanthemums produced by British growers and bought in Sheffield flower market a few days ago . 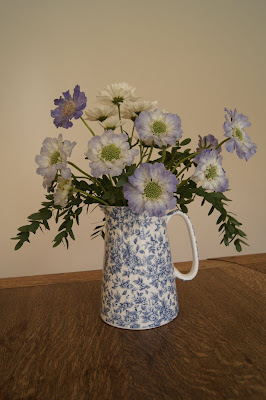 It is possible to buy some British grown flowers on the high street now from Sainsburys, Marks and Spencers and other supermarkets, but so far I am finding it difficult to find a regular wholesale supplier of British flowers.

I am also increasingly worried about the use of floral foam (better known as Oasis) in flower arranging. This is potentially harmful to both the environment and florists. Most flower arrangers and florists use Oasis – the dry foam is soaked in water and then flower stems can be placed into it. The advantage of it is that it holds flowers in exactly the position you want them (even upside down) and it allows the flowers to drink water (but not as well as they do in a vase). So, this candelabra arrangement that I produced at Jane Packer’s Advanced Floral Design Course in June would be impossible to create without Oasis. 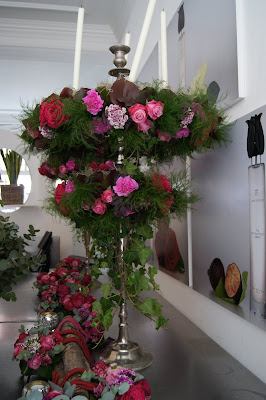 I have come across the website of a florist in Berkeley (her business is called Gorgeous and Green), USA, who has a personal mission to speak up about the risks associated with Oasis. She has directed interested people to the Material Safety Data Sheet (an official US document which lists all the health and safety issues related to products) for Oasis. She has pasted the 2009 version of the MSD Sheet onto her website. It states that Oasis is a thermoset plastic and it is not bio-degradable. It also states that it `may be irritating to eyes, skin and respiratory tract', that it 'may contain formaldehyde and/or carbon black' and that 'prolonged exposure may cause cancer'. Not good for florists or regular flower arrangers! Well I never liked it much anyway – nasty slimy stuff that looks very unattractive when it is time to deconstruct an arrangement. I have decided to avoid using it altogether and experiment with other ways of fixing flowers into place. One way is to use a container with a grid over the top which can hold the flowers. Here is an example using a small crystal bowl that I found at a Vide Grenier (get rid of stuff from your attic!) in France this summer. 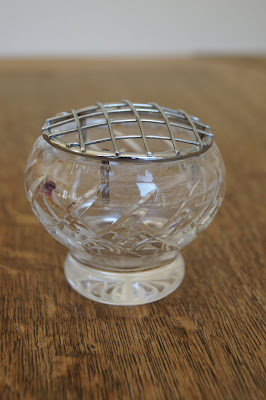 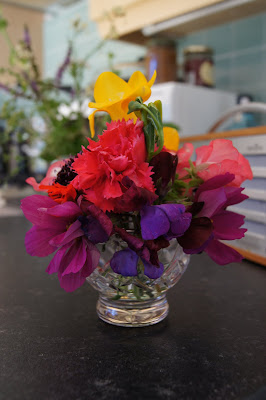 Here is another example where I made a grid out of tape (across the top of the vase) and made a large vibrant arrangement with bright orange roses, brown dahlias, dill seed heads and hydrangea leaves. I could not have made the flowers stand up properly without the grid, and the overall effect is just as good (and more natural in every sense) as it would have been with Oasis. 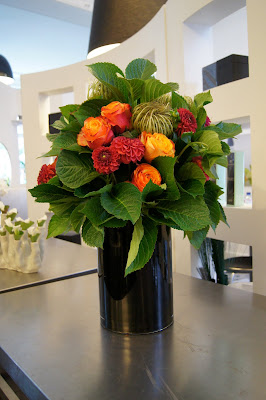 I have a book by Mary Rose Blacker called Flora Domestica – A History of Flower Arranging 1500-1930. This explains traditional ways which were used to hold flowers in place before floral foam was invented. I will be experimenting with these methods and reflecting on how they have worked in future blogs.
Posted by Liz at 15:46