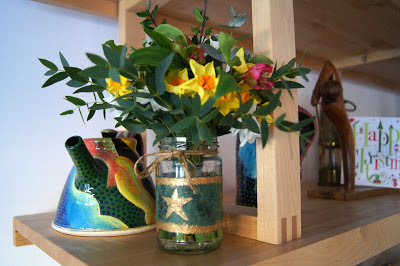 I hope you all had a great Christmas. Mine started with a bang on the Saturday before Christmas with a flower workshop. The little jam jar above is an example of what we made. I made green and red jam jars so that the workshop participants could choose either colour or a mix, depending on what matched their other Christmas decorations. 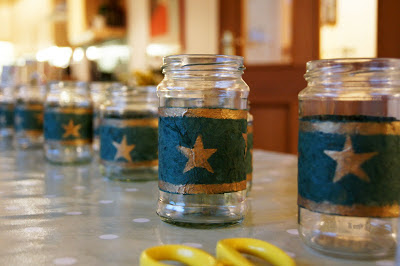 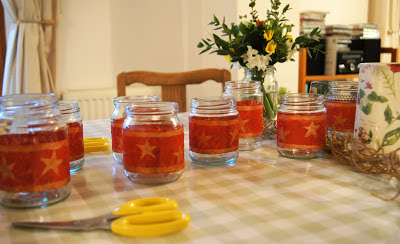 I had a delivery of lovely fresh English flowers and foliage from Cornwall for the workshop. We had pure white ‘paperwhite’ narcissi and bright yellow ‘hugh town’ and ‘soleil d’or’ narcissi – they all smelled wonderful. We also used some red alstroemeria to off-set the yellow and white and add a little festive cheer. The foliage was also fresh, vibrant and lovely to work with – myrtle, pittosporum and two sorts of eucalyptus (fantastic, heady smell). I added a few soft white roses from the Sheffield flower market to the mix. Then we used hand-tying techniques to arrange the flowers into three spirals and placed them in the jam jars. Hand-tying is one of the more difficult skills in floristry, but the good thing about this workshop was that everyone had three chances to practice it. And everyone learnt how to do it really well – what a success! Here are some of the results. 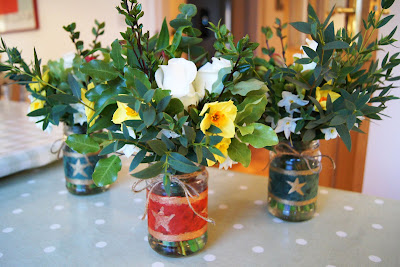 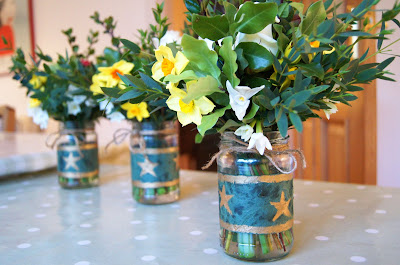 I was so busy running the workshop that I forgot to take photos of the participants in action. But here are some of the jam jars all bagged up at the end and ready to go…oh and there’s an example of one of the celebratory glasses of fizz that we drank at the end. Everybody had a good time and was really pleased with what they had achieved……and that made me very happy. 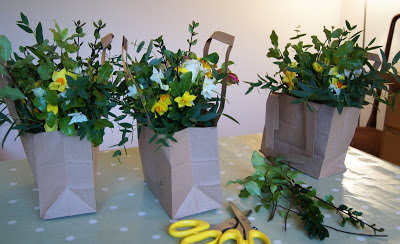 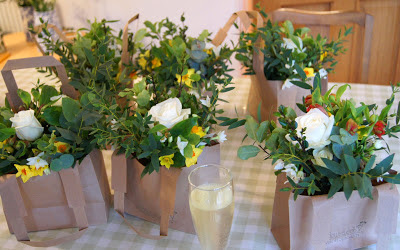 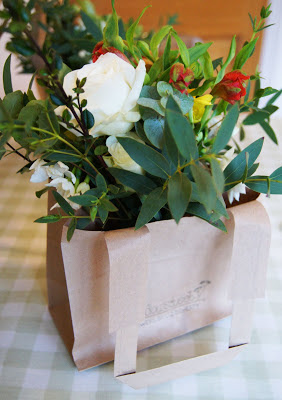 I also made a few bouquets – some for selling and some for giving as presents. I bought a few of these classy seasonal jugs from the Heron Cross Pottery – they worked really well with the flowers and I will buy more of them next year. Here is an example. 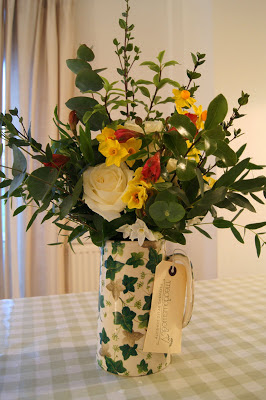 Over the last few years I have had a bit of a battle with Christmas wreaths. I`ve made them in oasis (which I have now rejected) and, in the traditional way, with wet moss as the base. I don`t really like either of these approaches as they produce a really heavy wreath that bangs about on your door and is likely to do permanent damage. This year I made a much lighter, but interesting wreath. I used twisted branches and ivy as the base and then I added dried flower heads from the garden (old man’s beard and hydrangeas) and a few dried seed pods and orange slices to decorate it. Some people loved it, but Jessie said it looked a bit Miss Haversham-ish….I expect you can see what she means. I am thinking of perfecting this approach and offering it as a wreath-making workshop next year – would anybody out there be interested in making something like this for Christmas 2013? 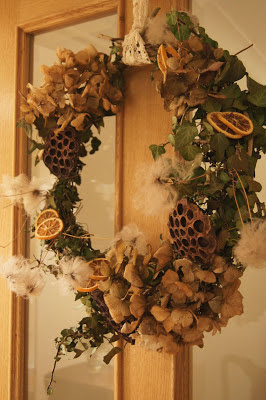 Another way of using Christmas wreaths is as table centres, usually including a few candles. When I wrote my blog last year I demonstrated this ingenious idea for making a wreath without oasis – two concentric metal circles which hold test tubes and incorporate candle-holders. The idea is to place little bunches of flowers in each test tube. Here it is set up with flowers and berries from the flower market. 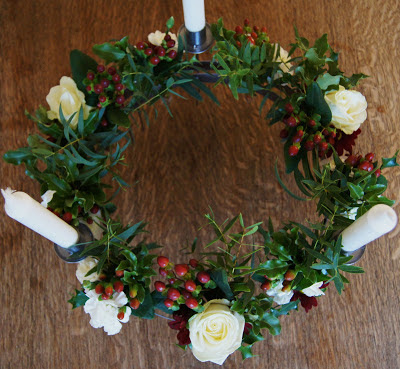 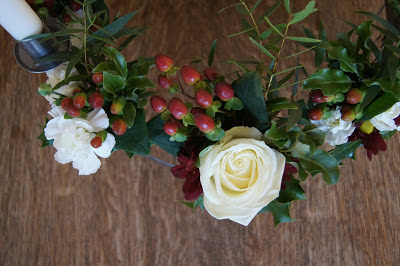 And here it is with a few modest fair trade roses from the supermarket together with foliage and berries from our garden (total cost, less than £4!). 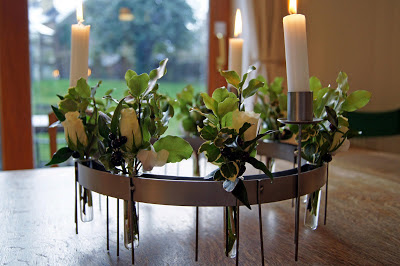 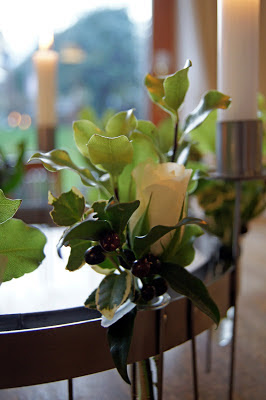 If you don`t want to spend much on flowers at this time of the year it is quite a problem as there is so little is growing for free in the garden (it is too early for crocuses, daffodils or hellebore). The one variety which is abundant everywhere is cyclamen. I have had three pots (white and dark pink) growing vigorously in our front porch since October. I have found that they last well in water – just a few with some sarcococca foliage and berries from the garden placed in small glasses made a natty little festive centre piece. 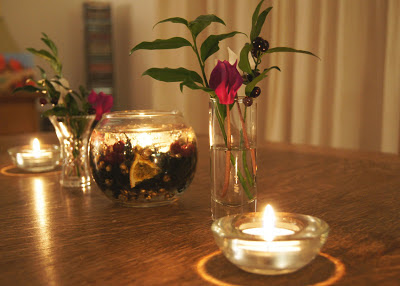 I am writing this blog on twelfth night. All the decorations have been taken down now and Mike and I are in our house in Hay-on-Wye doing a bit of maintenance before the next rental season begins. I have been out into the garden here and just look at this early harbinger of spring – catkins! I`ve put them in a plain glass vase in front of the fire (switched off as it is so mild) with some red skimmia and ivy (also from the garden). Simple, optimistic and bursting with life. 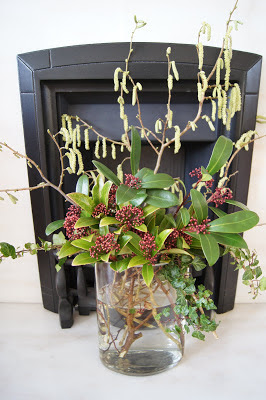 So…..as new growth begins to stir I would like to wish you all a very happy and productive New Year.
Posted by Liz at 10:06