Last month I visited London on a bit of a flower mission. First of all I visited the National Gallery and the Tate – I was looking to see how flowers had been depicted through different time periods and different styles. In truth, there weren`t many pictures that included flowers, and hardly any which made a feature of them. I really like the painting above by John Samuel Raven (1826-1877) which is a lovely, flowery view near Cobham in Kent. Most of the early paintings (around 1500s to 1600s) are religious and flowers are used to symbolise concepts like purity or peace. The precision painting below is by Francisco de Zurburan (1598-1664) and the accompanying words suggested that the water represents the purity of the Virgin and the ‘flower recalls her title of mystic rose’. 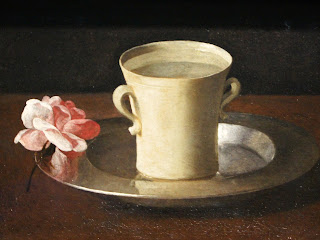 Quite a lot of the paintings present flowers as part of domestic scenes. This close up of a splendid urn is lifted from a painting of a lady drinking chocolate with her family and manservant (upper class!). It is by Nicolas Lancret (1690-1743). 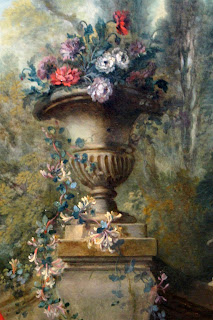 More recently, the impressionist Edouard Vuillard (1808-1940) includes flowers within domestic scenes in Normandy. The first is called ‘The Mantlepiece’ and the second is lifted from a much larger painting called ‘The Lunch’. 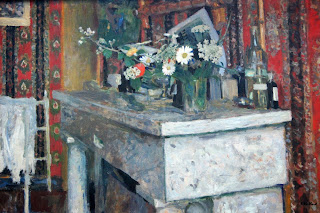 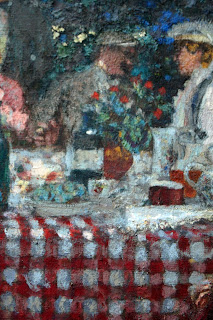 My favourite domestic scene is this one depicting women in the baths at Pompeii. We are told that it was carefully researched and then painted by Lawrence Alma-Tadema (1836-1912). It has the curious title of ‘A Favourite Custom’ – which I assume refers to the bathing. The women here seem to be having such a good time, and the vase of purple flowers could have been picked and displayed yesterday. 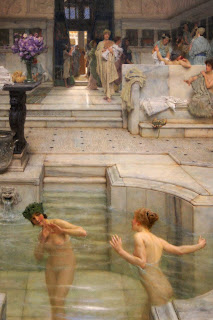 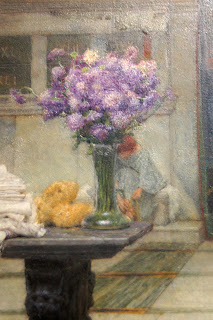 I was pleased to find a sumptuous Rossetti (1828-1882) with flowers. This painting is called ‘The Beloved’ or ‘The Bride’. It is interesting to see how the two young white women are holding cut flowers whilst the exotic black child-woman holds up a small vase of flowers (roses, I think). Like all of Rosseti’s work, this painting conveys romance and sensuality…..a far call from the chaste rose and water of de Zurburan. 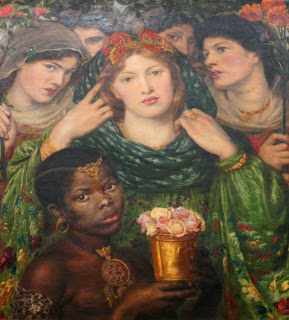 Finally, I found two pictures depicting poor, mad, sad Ophelia. Before she fell to her watery death, ‘fantastic garlands did she make of crowflowers, nettles, daisies and long purples’. The first painting is by John Everett Millais (1829-96) and the second by Odilon Redon (1840-1916). 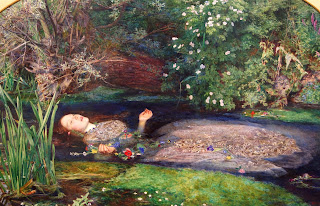 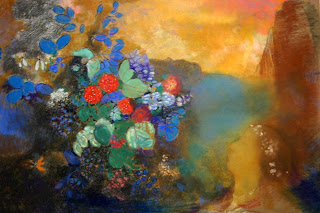 From the galleries, I made my way to the Garden Museum which is based in a de-sanctified church close to Lambeth Palace. 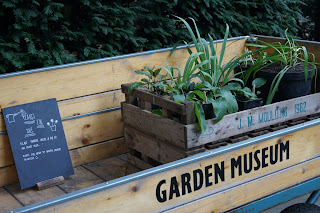 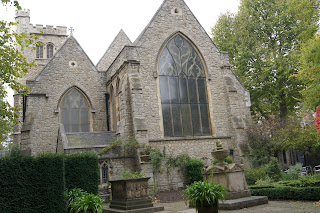 It was showing an exhibition with the promising title of ‘Gnome and Away’. The main exhibits were old gardening tools, some intricate paintings of gardens and a rather paltry display of gnomes (I wasn`t allowed to photograph them). I have to say, I have seen far better gnome collections in people’s gardens. The Museum’s own garden was looking pretty barren (far less interesting than our own garden in October) and the whole thing was a bit of a disappointment. They have some funds to refurbish the Museum, so I am hoping for better in the future. 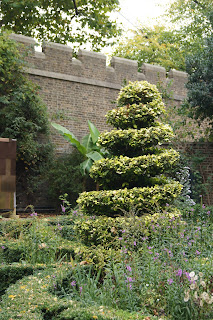 Then I had a bit of a treat. Jessie took me to Columbia Flower Market. 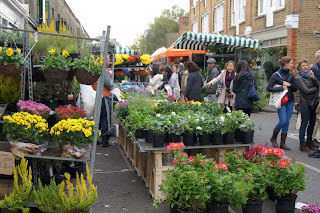 There were some great flowers, plants and gourds for sale – all at very reasonable prices. 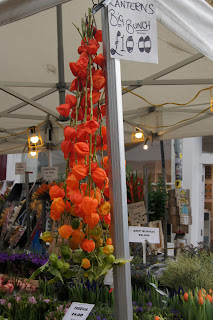 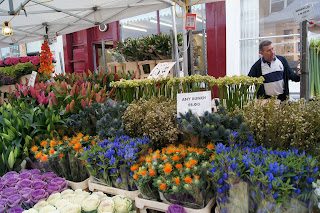 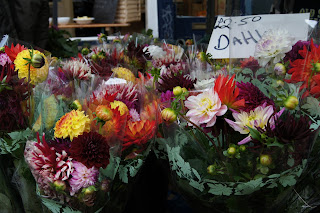 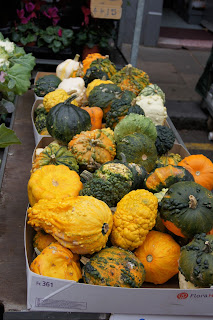 Here is what we bought: 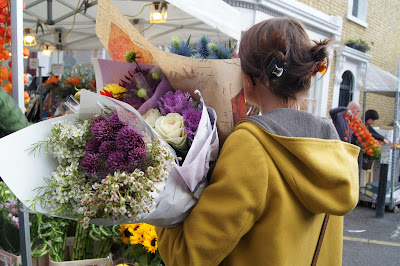 And what we made of our flower purchases. 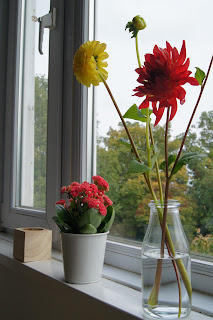 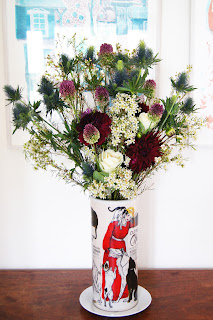 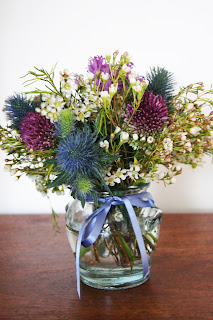 Rebecca Louise Law, an installation artist who works mainly with flowers, is based on Columbia Road. Her work inhabits a place somewhere between art and floristry. She is currently exhibiting arresting photographs in which she has re-created flower arrangements based on paintings by Dutch masters. Here is an example. 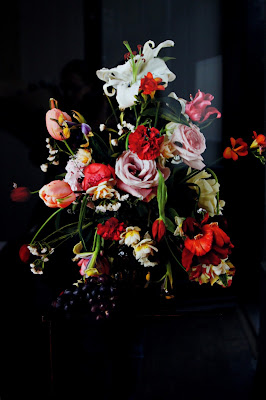 The darkness of this picture reminds me of our lengthening nights. This week I cut back all of our cosmos and other annuals, and the lawn has nearly stopped growing. My thoughts are now moving on to Christmas and I have already started to buy dried oranges, cones and cinnamon sticks.....